We recently got our hands on the brand new language translator from HiHo Solutions, and we think it is a game changer.

If language can sometimes create a challenge in your organisation, the HiHo Lingo Plus is the pocket-sized answer. Capable of translating between 108 languages it’s incredibly easy to use. Simply select the languages you want to translate between from the easy to use drop down menu, then speak and you receive an instant audio and text translation. The Lingo Plus isn’t limited to audio, it can also translate pictures. Point the device at some written text and it will translate it. Providing both an audio and a text translation displayed on the screen of the device.

There has been significant interest from some of our public sector customers. In particular in the health sector. Being able to communicate effectively with patients can be vitally important. In some cases a matter of life and death. The Lingo Plus can cut down on the time spent waiting for, and the considerable cost of interpreters. Several Police forces have also expressed an interest in trialling the unit, identifying cost savings and efficiency gains.

Unlike many language translators 12 of the most popular languages are available offline, when connection to the internet isn’t possible. To access all 108 languages the HiHo Lingo Plus connects to a hotspot or by tethering to a mobile device. Data can be transferred to a PC to keep a permanent record of your translations, ideal if you want to attach them to an individual patients record.

You can also connect a Bluetooth device on which to listen to the playback. So, whether you want to use it discreetly with a headset, or share the translators with a larger group via a Bluetooth enabled speaker, the Lingo Plus has you covered.

Priced at just £99.98 Inc VAT, this sophisticated language translation device is both effective and affordable. We don’t plan on leaving the country without taking one of these with us. 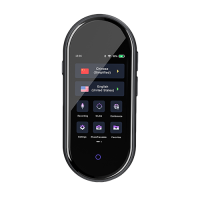